Sister city relationships are an overarching symbol of friendship that encourage and assist groups in government, business, culture and community to make contact with each other and build relationships of mutual benefit. Canberra has Sister City relationships with the following cities:

Less formal than sister city relationships, friendship agreements between cities pave the way for cooperation and mutual respect. They can enhance economic, humanitarian and sporting links.

Canberra is Australia’s national capital city and the seat of Australia’s Federal Government.

Following Australian Federation in 1901, ‘Yass-Canberra’ was selected as the region to host the Australian seat of government in 1908. In 1911-12, an international competition was conducted to design Australia’s capital. It was won by the Chicago team of Walter Burley Griffin and Marion Mahony Griffin. The new city was named by Lady Denman at the Foundation Stones ceremony on Capital Hill, on 12 March 1913 – now celebrated as Canberra Day.

Today, Canberra’s population of some 340,000 enjoys an unprecedented lifestyle, living minutes away from unspoilt nature parks and the magnificent Murrumbidgee River system, as well as enjoying the benefits of a diverse and cosmopolitan city. Around 80,000 Canberra residents were born overseas, spanning 50 different countries. As the diplomatic centre of Australia, Canberra is also home to 90 diplomatic missions.

As the nation’s seat of the government, Canberra is home to the Commonweath Parliament, the High Court of Australia and the administrative arm of the Australian Government – the Australian Public Service. Canberra’s economy is characterised by strong development and export opportunities in industries such as information technology, defence, biotechnology, education and tourism.

Canberra is a premier destination for students. This is due to its multicultural society, its reputation as a safe environment and as a provider of quality education with flexible learning pathways. There are over 6,000 overseas students enrolled at educational institutions in Canberra. 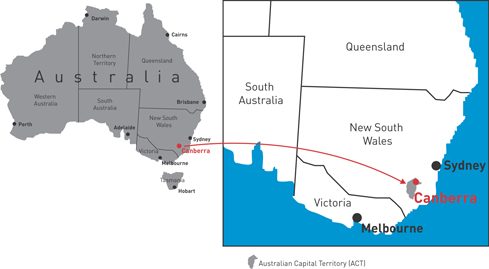